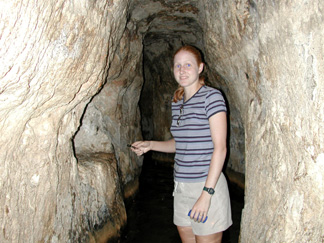 A brief description of the Gihon Spring, Hezekiah's Tunnel, and the Pool of Siloam follows.

For recent (summer 2005) discoveries of the New Testament Pool of Siloam Click Here.

Without an adequate water source a city in ancient times could simply not exist. Settlement in Jerusalem (the Old Ancient Core – later the City of David) developed around the major water source in the area – the Gihon Spring.

The Judean king Hezekiah (715 B.C. - 686 B.C.) built a tunnel to transport water from the Gihon Spring to the Pool of Siloam. It is 1760 ft. in length. At the beginning the ceiling is very low, at the Siloam end quite high. It seems that it was built to bring water from the east side of the city to an area inside the wall closer to the newly inhabited western portion of the city and possibly to protect the city’s water supply during the siege of the Assyrian king Sennacherib (701 B.C.).