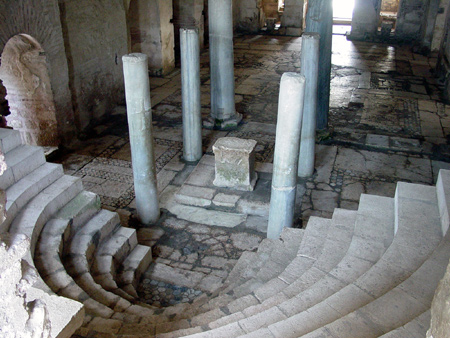 On the outskirts of the Turkish town of Demre—up until recently the town was called Kale, but in ancient times Myra—is a church that is associated with Saint Nicholas—Father Christmas, a.k.a. in northern Europe as Santa Claus!

St. Nicholas was born in nearby Patara about A.D. 300 and served as the bishop of Myra later in his life.  A number of miracles are attributed to this revered bishop, including his providing a dowry to the three daughters of a local baker.  Thus he is associated with “gift giving!”  He was also the patron saint of sailors and was prayed to for protection at sea—note that Myra is very near the Mediterranean Sea (Click Here to view a map).  He died about A.D. 345.

It is said that he was buried in this church, but that his relics (bones) were taken to Bari, Italy, about A.D. 1088, although other claims are made that the Venetians took them.

Myra is the ancient Lycian name of an important city located near the Mediterranean coast of Turkey.  Today the city is called “Demre,” or more recently “Kale.”

Myra was one of the three major cities in the Lycian Federation and it is believed that its name is related to the Greek word for myrrh.  There is no evidence that myrrh was grown here, but possibly it was shipped through the city on its way to the west—especially to Athens and Rome.

The apostle Paul visited Myra in A.D. 60—as a prisoner!  Paul, and possibly Luke and others (note the “we” section here), passed through Myra on their way to Rome after Paul had appealed to have his case tried before Caesar.  Acts 27:5–6 describes this portion of the trip from Caesarea to Rome in this way:  “when we had sailed across the open sea off the coast of Cilicia and Pamphylia, we landed at Myra in Lycia.  There the centurion found an Alexandrian ship sailing for Italy and put us on board.”  Much of this must have transpired in Andriace, the port of Myra.

In the Byzantine Period Myra was the provincial capital of Lycia, and in the fourth century St. Nicholas was its bishop!

There is a large plain area between Myra and the sea that was probably farmed extensively in ancient times.  Today plastic “hot houses,” in which tomatoes are grown, cover the whole plain!