View from above looking down on the Temple of Apollo. 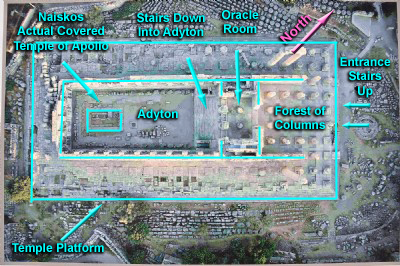 The naiskos was the actual Temple of Apollo (which was roofed) and measured 47 ft. by 27 ft. [14.2 m. by 8.2 m.]. The naiskos contained a statue of Apollo and the sacred spring. It was there that the priestess received her revelations that in turn were delivered to and interpreted by priest for those who were consulting the oracle.  The the priest would have returned to the Oracle Room to deliver the "answer" to the inquirer.