View of an inscribed stone slab that mentions Pontius Pilate the Prefect of Judea that condemned Jesus to death (Matthew 27; Mark 15; Luke 23; John 18 and 19). He governed Judea from A.D. 26 to 36.

This slab was discovered in 1961 by an Italian expedition that was excavating the theater at Caesarea Maritima.  Originally the inscription/stone was probably part of a temple called a "Tiberium" — that was dedicated to the Roman Emperor Tiberius (A.D. 14–37).  Then it was used as part of a well–head—note the half-circle on the right hand side.  THEN it was used as a step in the fourth century Byzantine theater (where it was discovered). 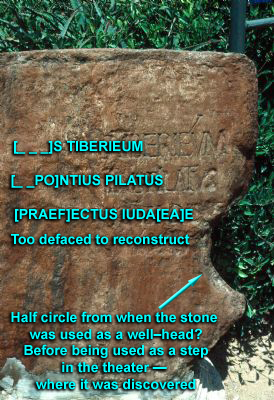 Four lines of the Latin inscription are visible.  The following information is from Joan E. Taylor “Pontius Pilate and the Imperial Cult in Roman Judaea.” New Testament Studies 52 (2006): 555–82—especially pages 564–65.

Joan E. Taylor translates it as:   "Pontius Pilate, Prefect of Judaea, [made and d]e[dicated] the Tiberieum for the (Augustan) gods" (p. 570).