Balage Balogh's three-dimensional drawing of the Iron Age remains excavated by Eilat Mazar in the southeastern corner of the "Southern Wall Excavations."  This "on site" drawing is composed of four panels.  The view is from the north northeast to the south southwest.

Upper Left Panel  In the upper portion of this panel is a view of the inside of the theoretical outer gate.  The red dot is on the pavement of the courtyard on the top of the Large Tower.  Just to the right of the red dot is the door that leads into the four-chambered Gate House.

Upper Right  In this panel the brown circular shields are on the top of the Royal Structure where Eilat Mazar discovered 12 large storage jars.

Bottom Half  In these panels the steep eastern slope of the City of David is visible as are the walls/foundations of the Large Tower and the Extra Tower.

Lower Right  Note in the upper left corner of this panel the junction of the Extra Tower, the Royal Structure, and the city wall that leads right (north; Balage signed the drawing on this wall). 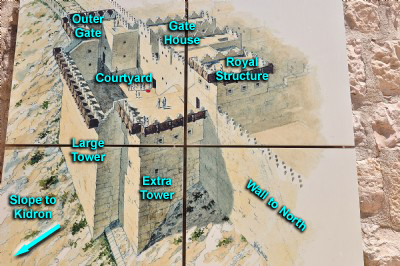