View looking down from the top of the Council House east towards the Upper Agora.

In the lower right of the image the pavement of the bouleuterion is visible and on the lower left the three entrance doors.  To the left of center is the reconstructed nymphaeum (that actually has flowing water in it!) that is flanked by two columns that were crowned by statues of leading citizens of Sagalassos. 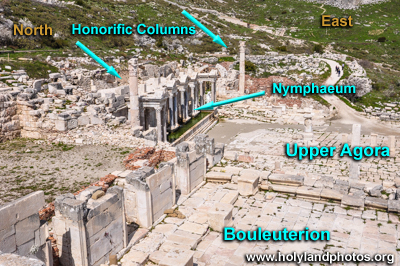