This inscription, dated to the second century A.D., lists six Politarchs ("Rulers of the Citizens") among other officials.

This term, "politarch," is used (correctly!) by Luke in Acts 17:6, 8 of officials in Thessalonica.

These "ruler of the citizens" were the chief magistrates of the city and were appointed annually.  "They performed administrative and executive functions, as well as exercising judicial authority . . . of the more than sixty known inscriptions that mention politarchs, three–fourths of them are from the Macedonian area of Greece, with approximately half being from Thessalonica itself." 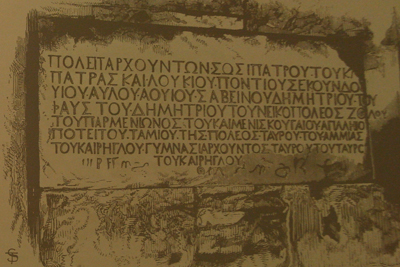 A reconstruction of the Politarch Inscription — from the British Museum.