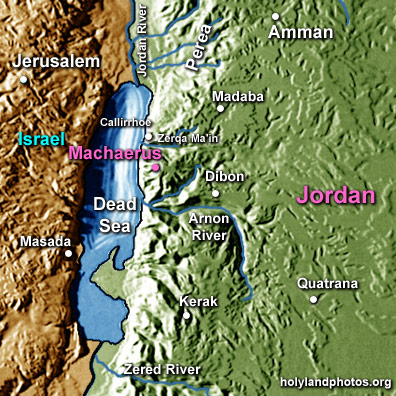 Machaerus is the place where the Jewish historian Josephus says that John the Baptist was executed.

This hill top fortress was first fortified by the Hasmonean ruler Alexander Jannaeus (103–76 B.C.) along with Masada on the west side of the Dead Sea.  It was later fortified by Herod the Great (37–4 B.C.) who also rebuilt Masada, the Temple in Jerusalem, Caesarea and other fortresses.  At Herod’s death it passed to his son Herod Antipas who ruled both Galilee and Perea until A.D.39).  It served as both a palace and a fortress—guarding the southern boundary of Perea against Nabatean expansion (the Nabatean’s capital was at Petra well to the south of Machaerus).

It was Herod Antipas that, at the request of Salome, the daughter of his wife Herodias, had John the Baptist beheaded (Matt 14:1–12; Mark 6:21-29; Luke 9:7–9).  Although the New Testament does not say where this happened, the Jewish historian Josephus places the execution here at Machaerus (Antiquities. 18.116–19)!

Jewish Zealots took over Machaerus during the first revolt against Rome, but eventually those in the upper city surrendered to the Romans in A.D. 72.

The site of the acropolis is called “al–Mishnaqa” (“the gallows”) and the village of Mukawir is located about a mile [1.6 km.] east of the site.  The Palestinian Grid Reference for Machaerus is 209108.