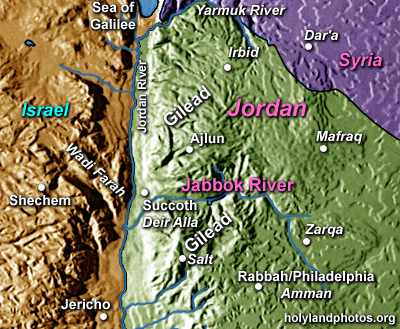 The major wadi of Gilead is the Jabbok that divides it into northern and southern portions. The Jabbok River begins near Rabbah/Philadelphia (modern Amman), where it flows north and then heads west to join the Jordan River.

Although narrow, the Jabbok is farmed along most of its length, and its descent from the hills of Gilead to Succoth (Deir Alla) in the Rift Valley is relatively easy. It is possible that the route that ran through this valley to Succoth, crossed the Jordan River, and continued up the Wadi Farah to Shechem, was the route used by Abraham and later by Jacob to enter the land of Canaan (Gen 12:5 – 6; 32:22 – 33:20).