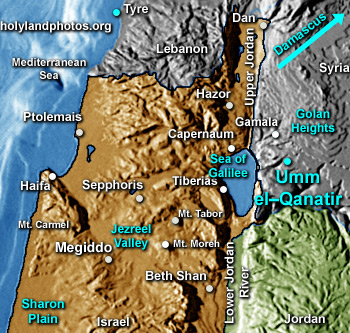 Umm el–Q/Kanatir (The Mother of the Arch) is a site located on the upper reaches of the Wadi Samekh, 5 mi. [8.5 km.] east of the Sea of Galilee on the Golan Heights (Old Grid Ref: 219250).  In recent years a synagogue, that was discovered in 1884, has been surveyed, excavated, and is in the process of reconstruction.

The village—ancient name not known—was constructed in the fourth or fifth century AD and was destroyed by the devastating earthquake of AD 749.

It boasts one of the best-preserved ancient synagogues in the land—90% of the remains (collapsed) were still in-situ after the earthquake of AD 749.  It is in the process of being reconstructed by Yehoshua Dray and his colleagues.

In addition, remnants of a flax processing installation have been discovered by the spring in the village.