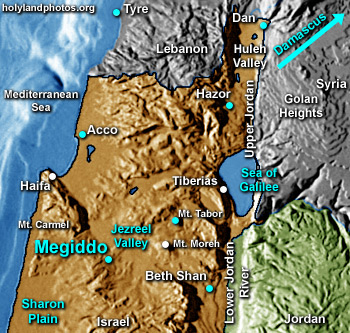 Megiddo is a large mound (15 a. [6 ha.]) that rises about 160 ft. [50 m.] above the surrounding plain.  It was excavated throughout the twentieth century and into the twenty-first century. It contains at least 20 distinct archaeological strata.

Megiddo was a strategically important city, for the main International Highway that led from Egypt to Mesopotamia passed by it.  For example, one heading north from Egypt would pass through the Sharon Plain, and then continue through the “Megiddo Pass” on Mt. Carmel to Megiddo.  From Megiddo, one could head north northwest to Acco (on the Mediterranean Coast), or east southeast to Beth Shan (and from there into Transjordan), or head north northeast, around Mt. Tabor, and then continue north to Hazor, Dan, and eventually Damascus.  All of these routes were extremely important, and Megiddo was at the “hub” of them.

Megiddo is mentioned twelve times in the biblical text.  The Canaanites controlled Megiddo until David conquered it and Solomon fortified it. Megiddo served as an important administrative center for the Israelite kings from the days of Solomon until it was conquered by the Assyrians (ca. 733 B.C.).

To study the extensive history of Megiddo, please consult a good Bible Dictionary or Encyclopedia.

This section contains images related to Megiddo from the Israelite Period.

To view remains of Bronze Age Megiddo - including temples and altars - Click Here.