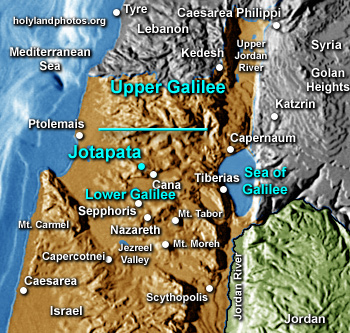 Jotapata was a city situated in Lower Galilee about 3 mi. north of Sepphoris and 9 mi. [14.5 km.] north of Nazareth.  It is not mentioned in scripture, but numerous times in the works of the Jewish historian Josephus.

It was fortified by Josephus, who was the Jewish commander in Galilee at the beginning of the First Revolt and after a 47-day siege the Romans captured the city.  Here Josephus went over to the side of the Romans—being one of the few survivors of the siege (War III: 141-408)!

The site has been excavated in recent years and here remains of the siege ramp, the defensive walls, houses (one with frescos), cisterns, caves, ritual baths, stone vessels, arrowheads, etc. have been discovered.