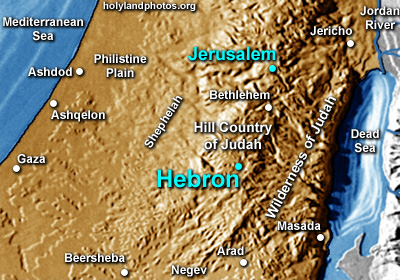 Abraham purchased a cave here and buried his wife Sarah in it. In turn Abraham, Isaac, and Jacob, and their spouses, were buried in Hebron. Joshua captured it and gave it to Caleb. Here David was made the king of Judah and later of both Judah and Israel. His son Absalom began his revolt here.

Excavations at Jebel er-Rumeideh have found remains from the Early Bronze Age (ca. 2400 B.C.), the Middle Bronze II (2000-1550 B.C.) and from the Israelite period (ca. 800 B.C.). The most prominent ancient structure in the city is the Tomb of the Patriarchs (Haram el-Khalil - the "sacred space of the friend [of God]" = Abraham).