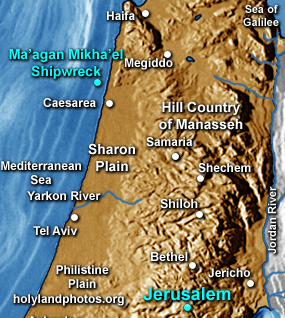 In 1985 a shipwreck dating to the fifth century BC was discovered off the coast of Kibbutz Ma'agan Mikhael (Michael)—ca. 5 mi. north of Caesarea.  The vessel was approximately 41 feet long and 13 feet wide.  It had a load capacity of about 15 tons.  The ship sailed under a square rig and its maststep (the wooden horizontal beam that holds the mast in place) was found intact!  The ship was probably manned by a crew of 4-6 mariners.

It was excavated for three seasons (1988–1989).  The ship and its contents were in an excellent state of preservation.  The wooden artifacts were soaked in polyethylene glycol (PEG) for seven years.  The ship is now on display in a special room in the Hecht Museum on the campus of Haifa University.

Compare the Galilee Boat that was discovered in 1986 and also soaked in PEG, etc.