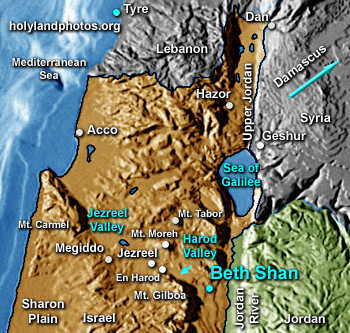 The tel of Beth Shan was first settled in the fifth millennium BC.  It was located at a major east/west and north/south crossroad.  There are at least 20 strata on the mound.  From the Late Bronze Age (1550–1200 BC) discoveries include 5 temples, built on top of another, public and residential buildings, a governor's house, and basalt monuments from the time of Egyptian rule.