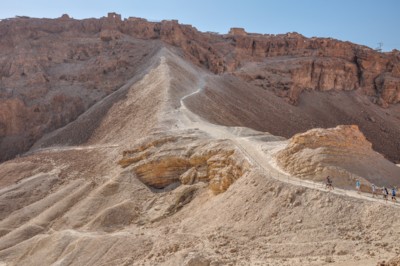 Although Jerusalem fell to the Romans in A.D. 70, a group of Jewish Zealots held out at the fortress of Masada.  From there they were able to raid and harass the Romans in the Hill Country of Judea and then retreat to the safety of Masada.

In the fall of A.D. 72 the Roman procurator of Judea, Flavius Silva began the project of wiping out this resistance.  He took the Tenth Legion along with other troops and Jewish captives and began the siege of Masada.  The Romans built a 2 mi. [3.2 km.] long siege wall around the base of Masada and built 8 camps at key points.

The battering ram eventually took its toll on the defenses of Masada and the Romans were able to access the fortress via the breach in the wall.  However, 960, of the 967, people on the top of Masada committed self–slaughter on the night prior to the Roman advance—preferring death at their own hands rather than death, rape, and enslavement at the hands of the Romans.