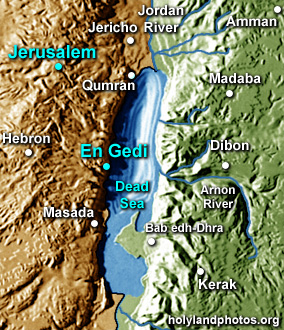 En Gedi is a desert oasis that was inhabited during the Chalcolithic Period, the Iron through the Byzantine Periods.  It was allotted to the tribe of Judah (Joshua 15:62).

Here David hid from Saul (1 Samuel 24), and here special spices were grown.  It was also famous for its vineyards (Song of Songs 1:14).

1Sam. 24:1    After Saul returned from pursuing the Philistines, he was told, “David is in the Desert of En Gedi.”  2 So Saul took three thousand chosen men from all Israel and set out to look for David and his men near the Crags of the Wild Goats.

1Sam. 24:3     He came to the sheep pens along the way; a cave was there, and Saul went in to relieve himself. David and his men were far back in the cave.  4 The men said, “This is the day the LORD spoke of when he said to you, ‘I will give your enemy into your hands for you to deal with as you wish.’” Then David crept up unnoticed and cut off a corner of Saul’s robe.

Song of Solomon 1:14     My lover is to me a cluster of henna blossoms from the vineyards of En Gedi.