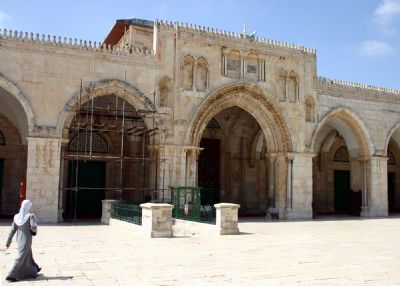 The el-Aqsa Mosque is located on the southern edge of the Herodian Temple Mount platform—now called, by the Moslems, the Haram esh–Sharif (the Nobel Sanctuary).  The mosque was first constructed by the Umayyad Caliph al–Walid  (A..D. 709–15).  The mosque is built over a large number of subterranean arches, not on bedrock, and thus has been destroyed (earthquakes) and rebuilt many times.

The name “el–Aqsa” means “the distant (place)” and refers to Muhammad’s Night Journey—briefly mentioned in the Koran.