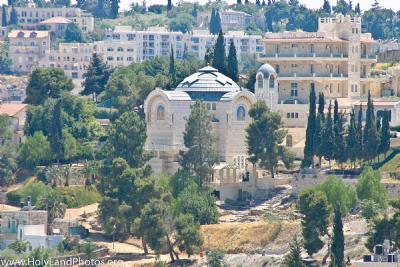 The church of Saint Peter in Gallicantu is located on the eastern slope of the western hill of ancient Jerusalem—south of the Old City wall, on present day Mount Zion.

The church was completed in 1931 and the Assumptions Fathers serve there.  The church is built on three levels, the bottom of which contains a series of rock cut caverns that are said to date to the time of Jesus.

Excavations to the north of the church have revealed a variety of rock cut remains along with a flight of steps that leads up and down the hill—it is said to date to the time of Jesus (= Second Temple Period).