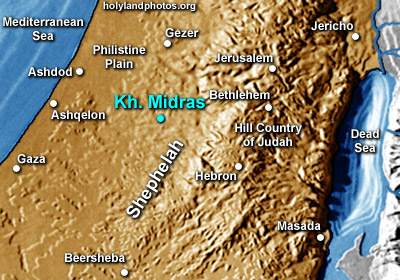 Horvat Midras (Hebrew) or Khirbet Durusiya (Arabic) is located 19 mi. [30 km.] southwest of Jerusalem in the Shephelah. The ancient remains are spread over hundreds of dunams in the area. The site dates to the Hellenistic and Roman periods.

In 1976 part of the cemetery was excavated. Several tombs were uncovered, including, in my estimation, THE BEST ROLLING STONE TOMB in the country. Unfortunately in the late 1990's the tomb site was totally destroyed by vandals.  BUT it has been reconstructed and is now visible in the Adullam Park!