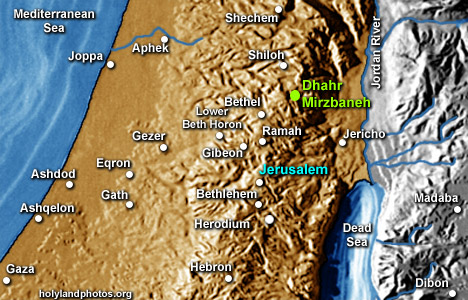 Dhahr Mirzbaneh is a site located slightly east of Ein Samiya, about 16 mi. [25.5 km.] northeast of Jerusalem. The hillsides in the area are covered with tombs from the Early Bronze Age, the Middle Bronze I Age (2200-2000 B.C.), and from later periods. The cemetery contains thousands of tombs – most of them from the MB I Age. About 150 of them have been examined: first by Paul Lapp, then by Y. Meshorer, and later by Z. Yevin

Here images of tombs from the MB I Age are presented. These images were taken in the 1970’s during a time of road construction in the area.