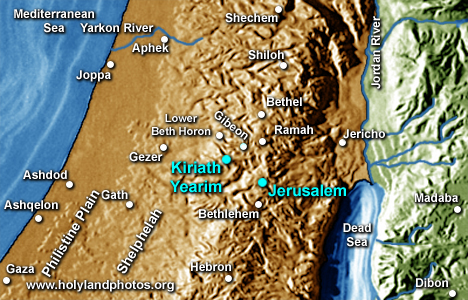 The Western Benjamin Plateau is that area that is located west of the watershed ridge in the Hill Country of Benjamin.  Both Gibeon and Nebi Samwil are located in this area, but they have their own special sections.

Included here are some views of western Benjamin and cities such as Kiriath Jearim, Chephirah, and the Israeli viewing point at Radar Hill.

The central and western portions of Benjamin are composed of hard Cenomanian-Turonian limestone; the central section, through which the watershed runs, is a relatively high plateau (2,500 ft.). The “Benjamin Plateau” formed the core of Benjamin’s tribal territory. It is circular in shape and is bounded on the south by Gibeah, on the east by Geba, on the north by Mizpah, and on the west by Gibeon. It receives about 25 inches of rain annually. A number of springs are found in this area, as throughout the Cisjordan Mountains, and plastered cisterns were commonly used to collect rainwater.