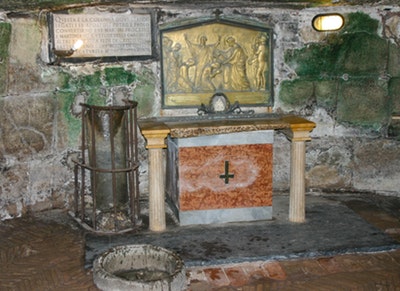 The "Mamertine Prison" is located on the eastern slope of the Capitoline Hill at the northwestern corner of the Roman Forum.  It is also called the Carcer Tullianum (Carcer Latin for jail; Tullius the builder).  According to tradition both Paul and Peter were incarcerated here.  Normally Roman jails were places where accused persons were held until their trials and/or executions.

According to historical sources, high-status prisoners were detained here from the sixth century B.C. on—including captive kings and rulers.  According to Christian tradition, this is where Peter and Paul were kept—at different times, probably while awaiting execution.  Of course, Acts 28:30 indicates that Paul spent two "full years in his own rented quarters" (NASB).