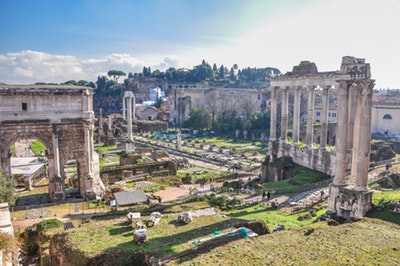 The Roman Forum was the central civil, commercial, and religious center of Ancient Rome.  It was a marshy swamp located below the Palatine and Capitoline Hills.  This stagnant area was drained by the Etruscan king Servius Tulius (6th century B.C.) when he constructed the Cloacae Maximus, a large drain system that diverted water into the Tiber river—it still is functioning today!

The Roman Forum grew during the Regnal, Republican, and Imperial Periods—expanding from the Capitoline Hill in the northwest toward the southeast.  Eventually, it was used for political and religious purposes—commercial enterprises were moved to a variety of fora to the north of the Roma Forum.

It fell out of use during the Medieval Period and was used for grazing animals, and as a source of building materials—some of the precious marbles were burned in kilns for lime (sigh).