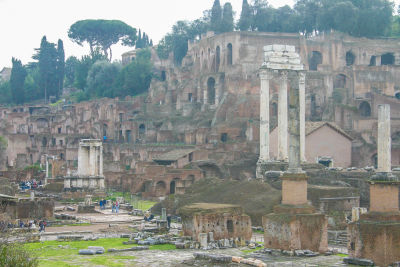 This section contains images of the structures that are located on the Palatine Hill—the most famous of Rome's Seven Hills.  This is the most distinct of the Seven Hills in that it has relatively distinct sides—mainly due to the terracing of building projects during the Imperial Period.  It rises about 120 feet above its surroundings.  To the north it overlooks the Roman Forum and to the south the Circus Maximus.

According to mythology, Romulus and Remus were found in a cave on this hill and after killing his brother Romulus, the mythical found of the city of Rome, settled here.  During the latter part of the Republican Period (509–27 B.C.) elite Romans had houses on the Palatine.  Beginning with Augustus, it became the center where Roman Imperial Palaces were located—and the most visible remains are from that period.