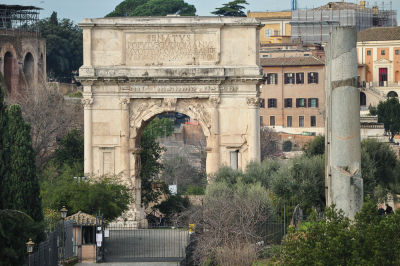 In the Roman Forum East I have included monuments such as: the Arch of Titus, the Temple to Venus and Rome, the church of Santa Francesca, the Basilica of Constantine and Maxientus, Antoninus and Faustina, the Temple of the Vestal Virgins, and the House of the Vestals.

The Arch of Titus (Roman Emperor A.D. 79–81) is located in Rome on the east end of the ancient Forum, as one walks along the Via Sacra toward the Colosseum.  The emperor Domitian (A.D. 81-96) built it soon after the death of Titus.

The arch commemorates the victories of Vespasian (A.D. 69–79) and Titus—particularly their putting down the Jewish revolt in Judea and the capture of Jerusalem in A.D. 70.

It is well to remember that this commemorative arch was built by Domitian, to commemorate a triumphal parade of the previous emperor Vespasian and his son Titus who was the actual conquer of Jerusalem, and who would eventually become emperor himself.

The sequence of emperors was Vespasian, Titus, and then Domitian.