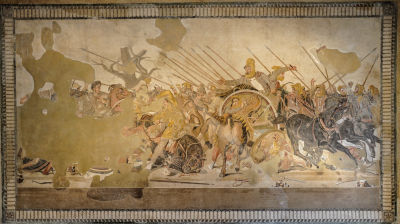 In the Naples Archaeological Museum, Museo Archeologico Nazionale di Napoli, there are displayed numerous mosaics (mainly floors) from the cities, such as Pompeii and Herculaneum, that were destroyed by the eruption of the Volcano Vesuvius in A.D. 79.

The mosaics that were found in the House of the Faun are posted there.  These include four images of the Alexander the Great vs. Darius III (the Persian king) at the battle of Issus.