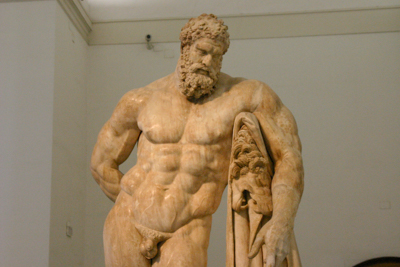 In the Naples Archaeological Museum, Museo Archeologico Nazionale di Napoli, there are displayed numerous statues from cities such as Pompeii and Herculaneum, that were destroyed by the eruption of the Volcano Vesuvius in A.D. 79.

In addition, the extensive Farnese Collection of statues is also on displayed! "Farnese" is the family of Alessandro Farnese who became Pope Paul (1534–1549).  He and others collected works of art that were displayed in Rome.  Eventually, most of the collection was transferred to Naples around 1787.

A number of these very important statues are featured in this section.