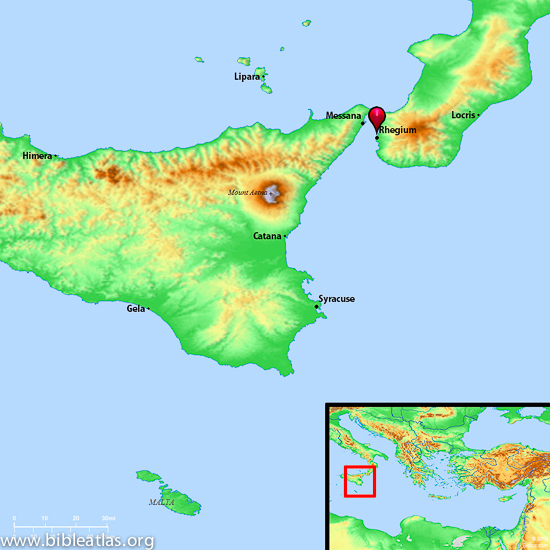 Rhegium, modern Reggio di Calabria, is located in the southeastern "toe" of Italy.  A 7–mile wide strait at this point separates Sicily from the Italian mainland.  Its "sister city," almost opposite it in Sicily, is Messina—Messana on the map.

Rheggio was founded in 720 B.C. and throughout its history it has been considered a very strategic point.  In the third century B.C., for example, it withstood attacks by Pyrrhus and Hannibal.  In the first century B.C., as a loyal Roman ally, it received municipal status.

It was a "safe haven" in the treacherous Messina Straits.  The ship that was carrying Paul to Puteoli from Malta, waited there for a south wind before continuing through the strait and on its way to Puteoli—ca. 180 mi. to the north.

Acts 28:13 From there we set sail and arrived at Rhegium. The next day the south wind came up, and on the following day we reached Puteoli.

Today Reggio di Calabria has a population of about 200,000 people.  Not many archaeological remains are visible, but it does have a very famous archaeological museum—the National Archaeological Museum of Magna Graecia with the famous Raice bronze statues.