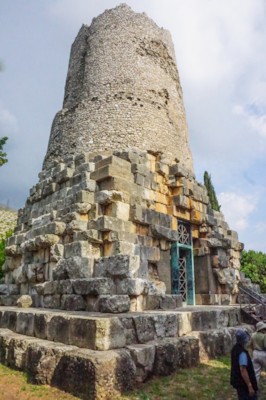 This funeral building is located 1.5 mi. northwest of the Italian city of Formia on the via Appia—about 40 mi. northwest of Puzzuoli/Naples.  It is dated to the second half of the first century B.C.  It is said to be the funeral monument erected in memory of the orator Cicero (106-43 B.C.).  Since it is on the via Appia, Paul would have passed by it on his way from Puteoli to Rome (Acts 28:11–16).  Cicero had a villa in nearby Formia (1.5 mi. to the southeast).  He was murdered by some of Mark Anthony's men as he was trying to escape by ship from Formia to Macedonia.

The structure was situated in a walled garden and is in the shape of a truncated cone on a large square base.  It was restored in 1957.