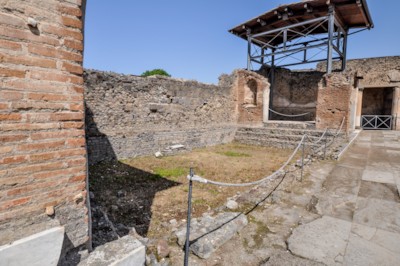 The Stabian Baths were the oldest and largest baths in Pompeii and were constructed in the second century B.C.  Besides the usual rooms (see below) they included a men's and a women's sections (thus baths).  They also included a large open exercise area (palestra) and a swimming pool.

The earthquake of A.D. 62 severely damaged these baths and some areas were not in use at the time of the eruption of Vesuvius.

There are seven large public bath complexes at Pompeii in addition to smaller baths in private houses.  A Roman Bath typically consisted of a dressing room (apodyterium), a medium temperature room (tepidarium), a hot room (caldarium), and a cold room (frigidarium).  One usually proceeded through the bath in that order.