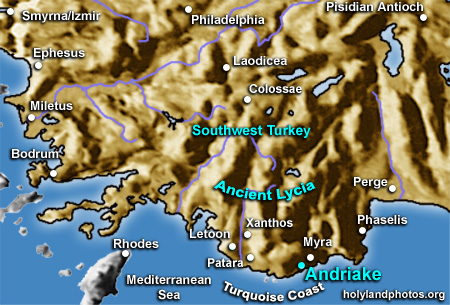 Andriace (also Andriake) is a port city located on the southern coast of Turkey in an area known in ancient times as Lycia.  Andriace served as the port of Myra that is located 3 mi. [5 km.] to the northeast.

Its remains go back at least to the Hellenistic Period (fourth century B.C.) and it evidently was a major trans–shipment point for grain.  The grain coming from the plain near Myra, and possibly from boats, bringing the grain from Egypt.  From here it could be shipped to Rome or to other parts of the Roman Empire.

Although not mentioned specifically in the Bible, the apostle Paul probably changed ships here in Andriace in A.D. 60 on his way to Rome after he had appealed to have his case tried before Caesar.  Acts 27:5–6 describes this portion of his trip from Caesarea to Rome in this way:  “when we had sailed across the open sea off the coast of Cilicia and Pamphylia, we landed at Myra in Lycia.  There the centurion found an Alexandrian ship sailing for Italy and put us on board.”  Much of this must have transpired in Andriace, the port of Myra.

A report on the excavations and inscriptions at Andriace can be found in Nevzat Çevik, Özgü Çomezoglu, Hüseyin Sami Öztürk, and Inci Türkoglu, "A Unique Discovery in Lycia: The Ancient Synagogue at Andriake, Port of Myra."  Adalya XIII (2010), 335–66.