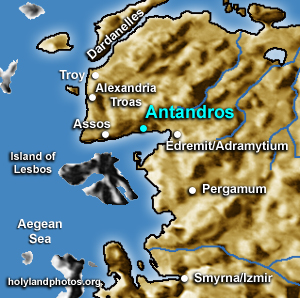 Because of the nearby forests, it was famous throughout antiquity for shipbuilding.  It has been under excavation since the early 21st century by Turkish archaeologists.  One of the more significant finds is that of a Roman Villa, called the "Terrace House," that was built in the fourth century AD and continued in use through the sixth or seventh century AD.

For the history and/or legends surrounding Antandros see the excavation website and conveniently Wikipedia.