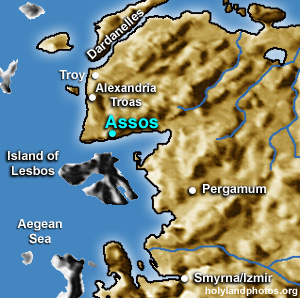 A brief introduction to Assos follows:

Assos (modern Behramkale) is located on the northwestern coast of Turkey on the Aegean Sea. It is on the southern shore of the area known as the "Troad." It may have been that ships stopped here before beginning their difficult journey clockwise northward around the Troad toward the Dardanelles.

The apostle Paul, on his third missionary journey, walked from Alexandria Troas to Assos, a distance of about 20 miles. At Assos he joined his companions, who had come from Troas by ship, and together they set sail for Mitylene, Kios, and eventually Miletus (Acts 20:15).

Assos is situated on the steep slopes of a 780 foot high hill. At the southern foot of the hill is the harbor of the city. It seems to have been founded in the 8th or the 7th centuries B.C. It successively came under the control of the Lydians, Persians, Greeks, and eventually the Romans. Its ruler Hermias (ca. 355-341 B.C.) founded a philosophical school there. The great philosopher Aristotle resided in Assos for several years (ca. 347-343 B.C.) before going on to become the tutor of Alexander the Great.

Large portions of its ancient 2 mile long wall are still in existence (in places to a height of nearly 60 feet!). On the acropolis significant remnants of the Temple of Athena are preserved.

The Archaeological Institute of America first excavated it, in the 1880's, and today the Turks are continuing excavations.