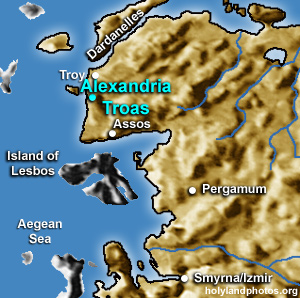 In the New Testament it is mentioned five times as Troas. The term "Troas" was added to "Alexandria" in order to distinguish it from other cities named "Alexandria." It was here, on Paul's second missionary journey, that in a vision he received a call to proceed to Europe (Acts 16:8–11). Because of the use of "us" it seems that Luke joined Paul and Silas on this portion of the journey.

As Paul was traveling from Corinth to Jerusalem at the end of his third journey he stopped in Troas for seven days (Acts 20:6–12). Acts records that during Paul's teaching, in an upper room on the third floor of a building, that Eutychus ("Good Luck") fell to his death - but was revived by Paul! From Troas Paul walked (31.2 mi. [50 km.]) to Assos where he met up with his traveling companions who had traveled by ship.

Later, when Paul was in prison in Rome, he requested Timothy to bring the cloak, books, and parchments which he had left with Carpus in Troas — among the last recorded requests of Paul (2 Timothy 4:13).

Alexandria Troas is huge — about 1,000(!) acres [405 ha.] in size. It is largely unexcavated although in recent years some work has begun at the site; and more is planned for the near future.