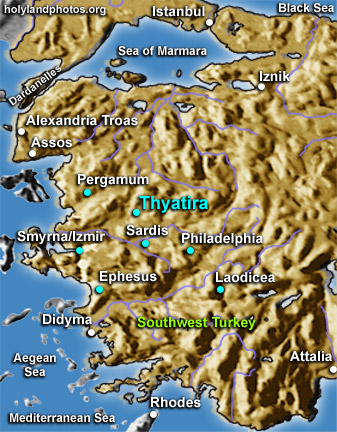 Thyatira, modern Akhisar, is located 42 mi. [67 km.] inland from the Aegean Sea. It is the fourth of the seven churches addressed by John (Revelation 2:18–29).

Although an important city in its own right, at times it protected Sardis, 37 mi. [59 km.], to the south, from Pergamum (47 mi. [75 km.] to the northwest) - and at other times it was controlled by the rulers of Pergamum to protect the southeastern approach to their city.

Near the center of Akhisar, visible archaeological remains are located in a fenced off rectangular city block. From coins it is evident that guilds of bakers, bronze smiths, wool workers, potters, linen weavers and tanners were active in the city. Such guilds would often hold banquets that included the eating of food offered to idols and participation in immoral sexual acts (cf. Rev. 2:20–24).

Lydia, converted by Paul in Philippi, was a dealer in purple cloth from Thyatira (Acts 16:11–15). Evidently the purple used to dye the cloth was from the local "madder" plant, and not from the murex shellfish from Phoenicia.

For a thorough discussion of the local allusions to Thyatira used by John see Hemer, C. J. The Letters to the Seven Churches of Asia in Their Local Setting. A new introduction by David Aune. Grand Rapids, MI: Eerdmans, 2000. Click here to examine.