View of the entrance to the Temple of Apollo - looking south.

The temple is built on a platform of seven "levels" - technically, an 11 ft. [3.5 m] high crepidoma. Because the rise of each of these levels was too great for normal approach, a series of 14 steps was constructed on this northeastern side of the temple (visible in the lower left portion of the image).

Clearly visible in the image is the "forest" of columns that surround the temple. There actually was a double row of columns surrounding the whole temple! The two sets of rows are visible on the right side of the image. On the long sides there were 21 columns in each row, and on the narrow side there were 10 in each row. There were 12 additional columns at the entrance to the temple. All totaled, there were 120 massive columns on the exterior of this structure!

For a map and descriptive comments about Didyma Click Here. 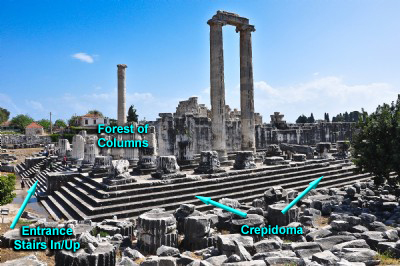