View looking northeast along the length of the Temple of Apollo.

In the lower right portion of the image are the stones that formed the foundation of the Temple of Apollo (which was roofed) and measured 47 ft. by 27 ft. [14.2 m. by 8.2 m.]. It contained a statue of Apollo and the sacred spring. It was here that the priestess received her revelations that were interpreted by priest for those who were consulting the oracle.

In the distance is the actual entrance into the temple.  Note the steps (used by the priests) that lead down into the central portion of the temple (the cella).

The priests would have received the requests of the worshipers at the top of the stairs and would have descended these stairs to the courtyard (lower portion of the image) and would have proceeded to the actual Temple of Apollo that was situated in this courtyard.

Note, on both the right and left sides of the image — just above the middle portion of the photo — two doorways.  These are two underground passageways, which descended into this courtyard.  The area at the top of the steps is called the chresmographeion, which is the place where the priest received worshipers' requests, and it is probably the place where a record of interpretations given were kept. 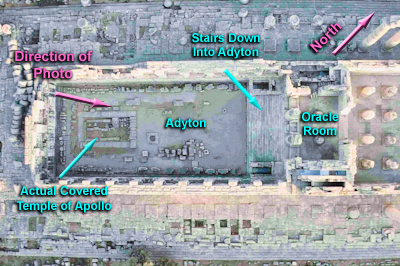