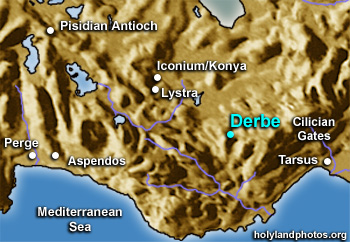 Derbe has been identified with the antiquity of site of Kerti Huyuku which is located 15 miles [24 km.] north northeast of Karaman. It is a distinctive mound set out in the middle of a plain. It has not been extensively excavated (excavations began in 2012), but an inscription found there mentions "the gods of Derbe" as well as the council and people of the town. In addition, a fourth century A.D. tombstone from the area mentions Michael, a bishop of Derbe. Derbe was situated in the Lycaonian region (Acts 14:6) of the Roman province of Galatia.

It was the eastern most city visited by Paul and Barnabas on Paul's first missionary journey (Acts 14:20). Evidently they were not persecuted there as they had been at Lystra and Iconium (2 Tim 3:11). Instead of heading directly to Tarsus and Antioch, through the Cilician Gates they revisited the churches that they had established at Lystra, Iconium, Pisidian Antioch, Perge and Attalia before departing by ship for Antioch on the Orontes. Paul revisited the city on his second (Acts 16:1) and probably third journeys as he passed westward through the region. Gaius of Derbe actually joined him for at least a portion of his third journey (Acts 20:4).