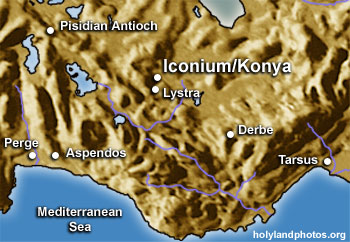 Iconium (modern Konya) is located 150 mi. [250 km.] south of Ankara and about 100 mi. [165 km.] east of Pisidian Antioch — via the road system. Paul and Barnabas visited the city on Paul's first missionary journey (Acts 13:51–14:7). Here they preached in the synagogue and then the city.  After about three months the opposition became so great that they had to flee for their lives to Lystra and Derbe. Paul revisited the city on his second (Acts 16:2) and probably third journeys.

Iconium is situated at the western edge of the great Anatolian plateau at an elevation of 3,600 feet (1,100 m.) and roads from the east, especially from Cilicia (Tarsus) gather to it. From Iconium there is a pass through the mountains to the west — as the road heads toward Pisidian Antioch. In Paul's day the prosperous city was a Roman colony.

A later legend — The Acts of Paul and Thecla (third century A.D.) — describes the exploits of Thecla who, originally from Iconium, was miraculously saved from death first by fire and then by wild beasts. She is said to have been commissioned by Paul as an evangelist.  She eventually settled in Antioch on the Orontes where she died. This same work contains the earliest physical description of Paul that we have.

Even at the end of his life Paul remembered vividly the persecution that he suffered at Iconium and the region (2 Tim 3:11).