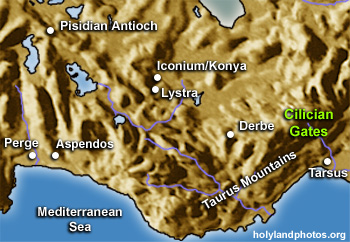 The Cilician Gates is really a pass in the Taurus mountains though which almost all traffic passing between the Cilician Plain (Tarsus) and the Anatolian highland (Iconium) passed. The idea of a "gate" seems to refer to that which one must pass through, and through which access can be controlled.

The Cilician Gates, lie 27.5 mi. [44 km.] to the north of Tarsus (via the ancient road system). This pass has always been of strategic importance.