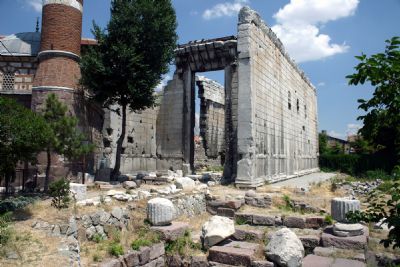 In the oldest section of Ankara, called “Ulus,” are a number of remains from Roman times.  The most famous is the very well–preserved “Temple of Augustus”—the first of the Roman emperors who ruled from 27 B.C. to A.D. 14.

It was a great honor for a Roman province to be able to build a temple to honor the emperor, and Ankyra, the capital of Galatia, was granted this honor after the Romans established the province of Galatia in 25 B.C.

This temple is of great importance for at least two reasons:  one, it is very well–preserved, and two, an inscription, called the “Monumentum Ancyranum,” is inscribed on its walls in both Latin and Greek.  These identical inscriptions, called the ‘Res Gestae,” describe in detail the rule of Augustus and are of great historical value.  These are the best copies of this important document that have been preserved—additional fragments have been found at Pisidian Antioch in Turkey (modern Yalvac).