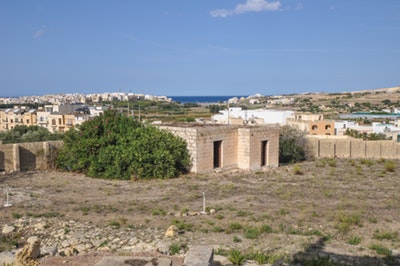 San Pawl Milqi is a Roman Villa that was built at the end of the 2nd century/1st century B.C.  It overlooks the Burmarrad Plain and the Salina Bay (1 mi. away) to the northeast—see image above and here.  A "Roman Villa" is a luxury house in the country that is associated with a large agricultural estate.  They were owned by very wealthy people.  A fire in the mid–3rd/beginning 4th century A.D. caused the abandonment of the villa.

Tradition has associated this place as the Villa of Publius, who was the "chief official of the island" when Paul landed there.

Acts 28:7     There was an estate nearby that belonged to Publius, the chief official of the island. He welcomed us to his home and for three days entertained us hospitably.  8 His father was sick in bed, suffering from fever and dysentery. Paul went in to see him and, after prayer, placed his hands on him and healed him

The church that exists today derives from an A.D. 1616 Church that had replaced an earlier fifteenth-century church.