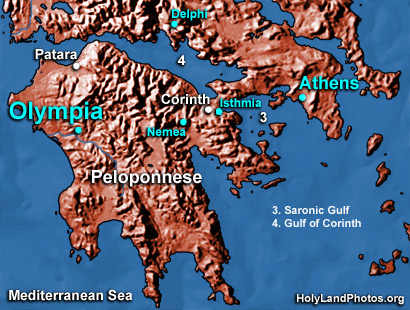 Olympia was a sacred precinct, not a city, that was located on the western side of the Peloponnese in a rather low, lush, flat plain area.  It is about 120 mi. [190 km.] west southwest of Athens—as “the crow flies.”

It was here, every four years in August or September, that athletic games were held in honor of Zeus.  The games originated in 776 B.C. and were held for over 1,000 years, until A.D. 393 when they were banned because of their pagan associations.  The “heyday” of the games was in the fifth century B.C. when athletes came from all over the Greek world to participate in the week–long festivities.

During the games there was a sacred truce during which wars ceased.  The winners of contests—running races, pentathlon, boxing, chariot–racing, horse racing, and the pankration—received a wreath of wild olive leaves and brought great fame to his family and city.