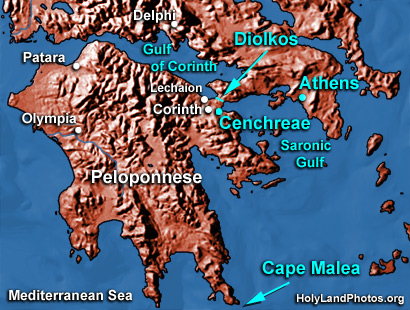 Cenchreae was Corinth’s port located about 6.5mi. [9 km.] east on the Saronic Gulf.  It was Corinth life-line to Athens, to Asia Minor, and additional ports in the eastern Mediterranean.

Having stayed at Corinth for 18 months, Paul set sail for Jerusalem (via Ephesus and Caesarea) from here at the end of his second missionary journey (Acts 18:18).  Just prior to his departure he cut his hair in Cenchreae—in fulfillment of a vow (18:18)