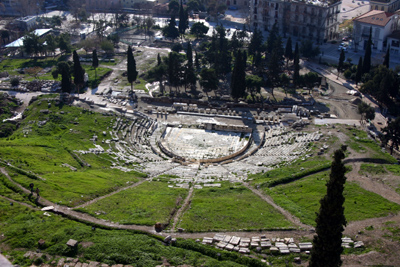 The Theater of Dionysus is located on the eastern portion of the southern slope of the acropolis of Athens. Originally nothing more than seats on a hillside (sixth century B.C.), a stone theater was constructed by Lykourgos between 342-326 B.C. and this went through numerous builds and rebuilds during its long history.

It was here that works by the great Greek playwrights Aeschylus, Sophocles, Euripides, and others were first performed.

This multifunction theater at various times in its history hosted choral productions, plays, readings, presentation ceremonies, military displays, cock-fights, gladiatorial games, mock water battles and at times the assembly of Athens met here rather than at the Pnyx .