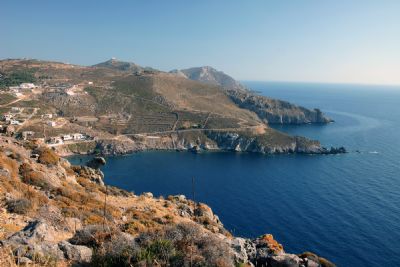 This section contains rarely seen/visited places illustrating the terrain of the island of Patmos.

Patmos is a Greek island in the Dodecanese group, located about 40 mi. [65 km.] west of the western coast of Turkey.

It was here that John was exiled and received the revelation that he wrote about in the New Testament book of Revelation (Rev 1:9).  Tradition maintains that he was exiled to Patmos during the reign of the Roman Emperor Domitian (A.D. 81–96).  He was eventually released and returned to Ephesus—located about 60 mi. [100 km.] to the northeast of Patmos.