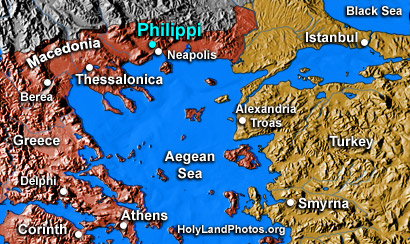 Philippi is located about 9 mi. [14 km.] inland (north) of Neapolis (modern Kavala). It was founded in the fourth century B.C. After the battle of Philippi, in 42 B.C., veterans of the Roman legions were settled there and in 27 B.C. the city became a Roman Colony. It was an important city of Macedonia, and the main highway from the east that headed towards Rome, the 493 mi. [790 km.] long Via Egnatia, ran through the city.

On his Second Missionary Journey Paul visited the city (around A.D. 50–51) and there Lydia and the jailor, and their households, were converted to Christianity. Paul and Silas were unjustly imprisoned but were soon released by the magistrates of the city (Acts 16:12–40). Paul again visited the city on his Third Journey (Acts 20:20). During one of his imprisonments (probably in Rome in A.D. 61) Paul wrote "Philippians" to the church at Philippi.