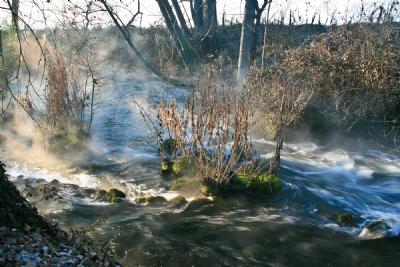 Soon after Paul’s arrival at Philippi on his second missionary journey—on the Sabbath—he “went outside the gate to a riverside, where we [Luke included] were supposing that there would be a place of prayer”  (Acts 16:14).  There a woman named Lydia from the city of Thyatira, a seller of purple fabrics” was converted to Christianity and was baptized (Acts 16:14–15).

The exact site of this event is not known, but its memory is preserved just north of the Krenides gate of Philippi, about 0.5 mi. [0.8 km.] west of the archaeological site.  Here the Greek Orthodox have built a baptismal site along the river and have constructed an octagonal Church of Saint Lydia that is used for Orthodox baptisms.