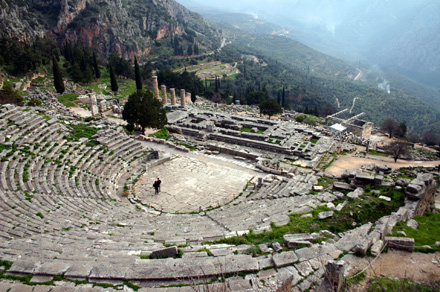 The theater of Delphi is located above the Temple of Apollo.  It was first built by Eumenes II of Pergamum (in Asia—modern Turkey!) in the second century B.C. and rebuilt a number of times during the Roman Period.

It has 35 rows of seats, a diazoma and could hold about 5,000 spectators.  The orchestra area is almost a complete circle.  It is paved with polygonal stone slabs and has a diameter of about 60 ft. [18 m.].

The theater was used for recitals that were given in honor of Apollo and Dionysus.